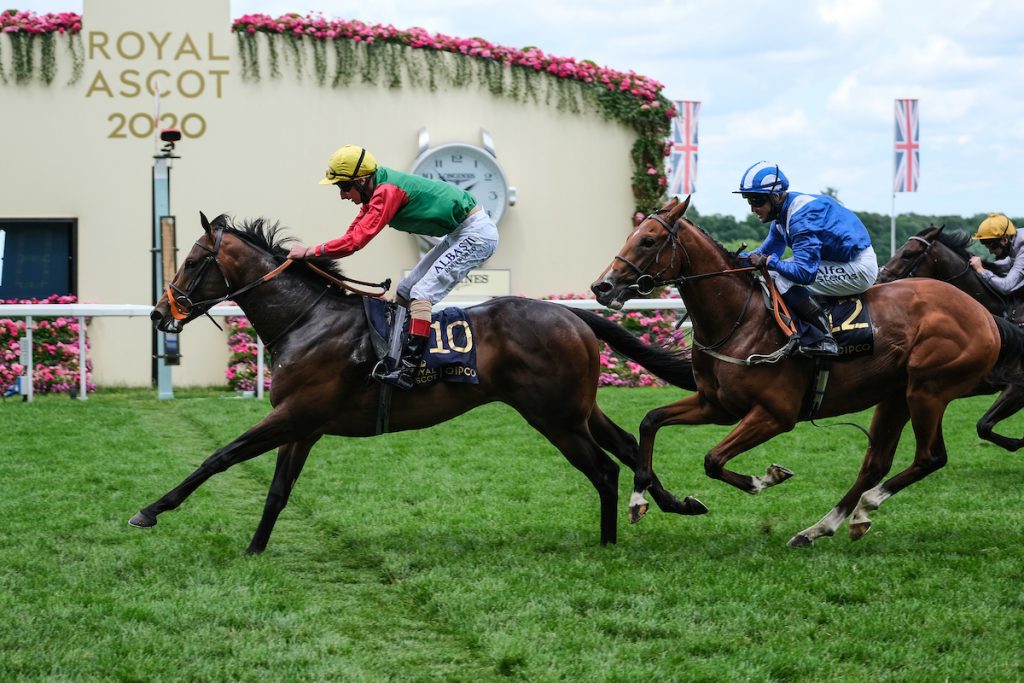 Nando Parrado became the longest priced winner in the modern era at Royal Ascot when defying odds of 150/1 to take the G2 Coventry Stakes.

The two-year-old Kodiac colt had finished fifth on debut at Newmarket on June 4 and there was no hint of a fluke about his victory today. Always in a prominent position, Nando Parrado took the lead just inside the final two furlongs and saw off all challengers to score by a length from Qaader.

Clive Cox said: “Not a shock at all! He is a lovely horse. He was drawn one at Newmarket, and on the day it turned out to be a little bit of a tough ask. When you looked at the form from Newmarket, there was a little bias to either rail that day. He was first in the stalls that day on a really windy day and stood there like a saint. He was a bit slowly away, and had been so good at everything that he had done at home, and then had to run a little bit forwards – we were hoping he was going to come across a bit, but he used a bit of petrol to do that and then he didn’t come down the hill and it was game over. But you have only got to look at the horse – he has got a real stamp of class about him, and he has clearly shown that today.

“Fair play to Paul and Marie McCarten, who own him. We were a little bit deflated at Newmarket, he ran well but I think on the day, as Adam said, he did not handle the track. He had a nice introduction, but we were expecting a bit more on the day to be fair.

“The price was a shock. Nando Parrado is a proper horse and we loved him from the start. This was always the plan, it was just a sideways step on his first run. He came home and thrived from there, and then when the rain came earlier in the week, I knew he would be better on good or slower ground than quicker ground. I am just delighted, but there was a little bit of wavering from the owner. We actually took him out the other morning, because he wasn’t sure he could really go for the Coventry, and I persuaded him to put him back in there. Paul McCartan’s a great guy and I am really pleased to train a winner for him and Marie. He thought after Newmarket, could we really turn up and take the right step, and I am grateful – I have a great team at home. Jerry McGrath rides this horse at home every day, and he has made all the right steps since he came back from Newmarket.

“I did back him! So we are very happy… I don’t know what price I got yet. When I saw the price, it was a little bit of an insult to our thoughts on him, so I am delighted.

“Listen, it is all about having winners at Royal Ascot, and to have two like this is so, so special.

“I always thought he would be a horse for the autumn rather than the height of summer, to be honest with you, so that is what I’d be aiming for. We will plan our way from here but we won’t be rushing him. I would say he will be a miler next year. I would say he would be more of a Dewhurst horse than a Middle Park horse later in the season.”

“He galloped with a very smart horse five weeks ago. His work was above average – a very strong piece of work and he finished his work very well.

“When he went to Newmarket [finished fifth], we thought we were going there with a live chance, but he didn’t handle the track or ground. He didn’t come down the hill, but we have got different ground today and he was a lot more streetwise – he toughed it out really well.

“It is a surprise because we’ve brought some very nice horses here in the past for this particular race and it takes a serious horse to win it. I am delighted to win it. We have fired a lot of live bullets in the race and I am very pleased to have the race won now.

“He could be well a Guineas horse. I can see him getting a mile very easily. He has got a decent mind, is very relaxed and there is no reason he can’t get a mile.

“It is no fluke he won today on the front end and toughed it out, I am pleased for him.”