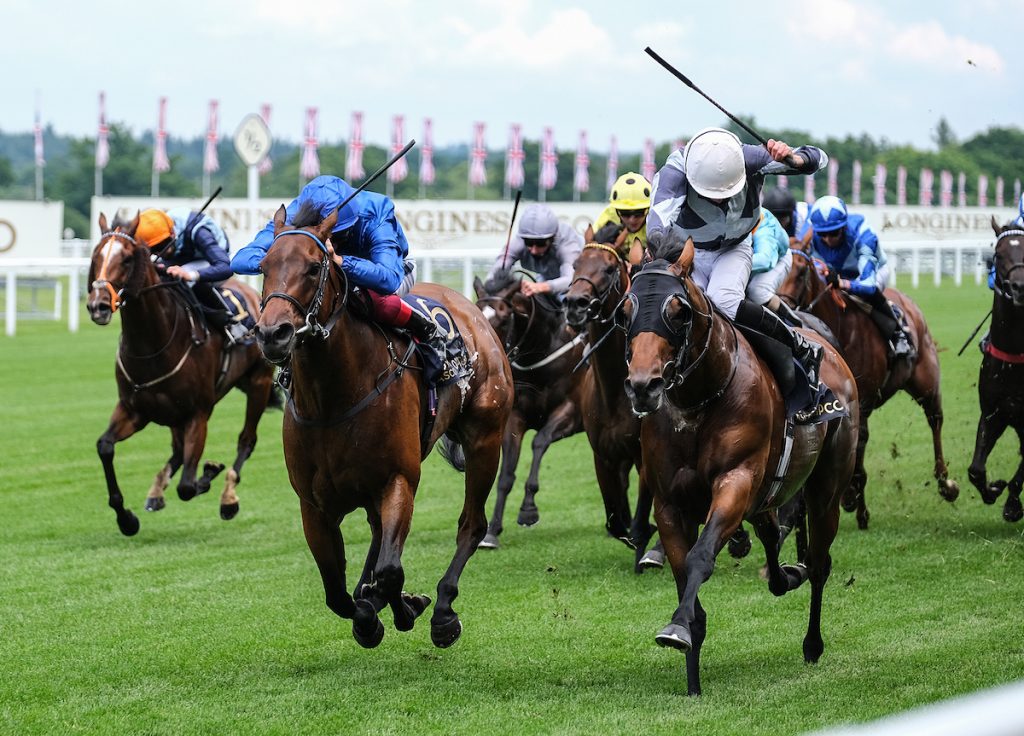 Today the son of Galileo (the 4/1 favourite) had to battle hard in the final furlong, coming out on top by head from Terebellum (5/1) after a sustained duel inside the final furlong. The pair drew right away from the rest of the field, with Marie’s Diamond three lengths away in third.

Aidan O’Brien, recording his 71st Royal Ascot success, said: “We were delighted with that performance. Circus Maximus is very tough, he travels with a lot of speed, then quickens and then toughs it out. It was unbelievable, really. Ryan gave him an unbelievable ride and we are delighted.

“It is very exciting to have a winner. Royal Ascot is usually a very busy week for us as we go back and forth, so it is brilliant to be able to see all the preliminaries. It is great for us and we get to see a lot of stuff that we otherwise wouldn’t. We have got a great team of people to do everything when we are not there, and we couldn’t be happier really.

“Pat Keating and the lads bring them to the races and the lads fly them over so it’s a great team of people and they are all working together. We are so lucky to have so many special people really.

“Circus Maximus is a very good horse. He is a Galileo from a good family and has a great pedigree. He is tough, has pace and is brave – he is a trademark Galileo.

“I think he has probably been a bit underestimated. He is a very solid horse and all his best form has been over a mile and that makes him all the more valuable and interesting. He travels very strongly and then loves getting eyeballed. He is a very good horse.

“I think a mile is his trip. The problem is he is lazy and that is why he wears blinkers. It is only when the tempo is really high that he actually races so I think a mile and a quarter and a mile and a half trips don’t allow him to focus. So, I would imagine he would stay at a mile.

“I would say the Sussex Stakes is the race for him. He is very comfortable racing around a bend.”

It was a 59th Royal Ascot success for jockey Ryan Moore who said: “He is a very straightforward horse. He won the St James’s Palace here last year and won the Moulin at Longchamp. He has been a really good horse and this is his third Group 1.

“They had their chance to come and beat him, but he battled away and fought all the way. I am delighted with what he has done today.

“He won the Dee Stakes and ran a good race in the Derby, he was sixth and wasn’t beaten far.  And as I said that is his third Group 1 and I delighted with him.

“I would say it is good ground, just maybe a bit slower, just on the slow side.

“We’re very happy that we are here racing, the [lack of crowd] does detract from it all, but that is the way of the world at the moment.”

John Gosden, trainer of runner-up Terebellum, said: “She ran a great race. They didn’t go any pace which probably played against her as she gets a mile and a quarter. She hit the front and the other one just came back on the run to the line under a rousing ride.”

Eve Johnson Houghton, trainer of Accidental Agent, who finished fifth today having won this race in 2018, aid: “I was absolutely thrilled with him. God alone knows what we do now – but he has definitely got another Group race in him. What he really likes is a fast gallop, which they didn’t really get to here. I gave him a shout! I was so proud of him that he finished his race off.

“People keep saying it was a substandard Queen Anne that he won; I didn’t think there were any substandard G1s at Ascot, and it really pisses me off every time they say that. Who cares – I’m thrilled with him.

“We are racing, and hats off to everyone that made that happen. It’s not racing as we know it, but they are fabulous horses and we should be enjoying them for what they are.”

Click here for an audio interview with Aidan O’Brien:
http://www.lloydbell.co.uk/access2/index.php?a=UmFjZW5ld3M=&b=31555