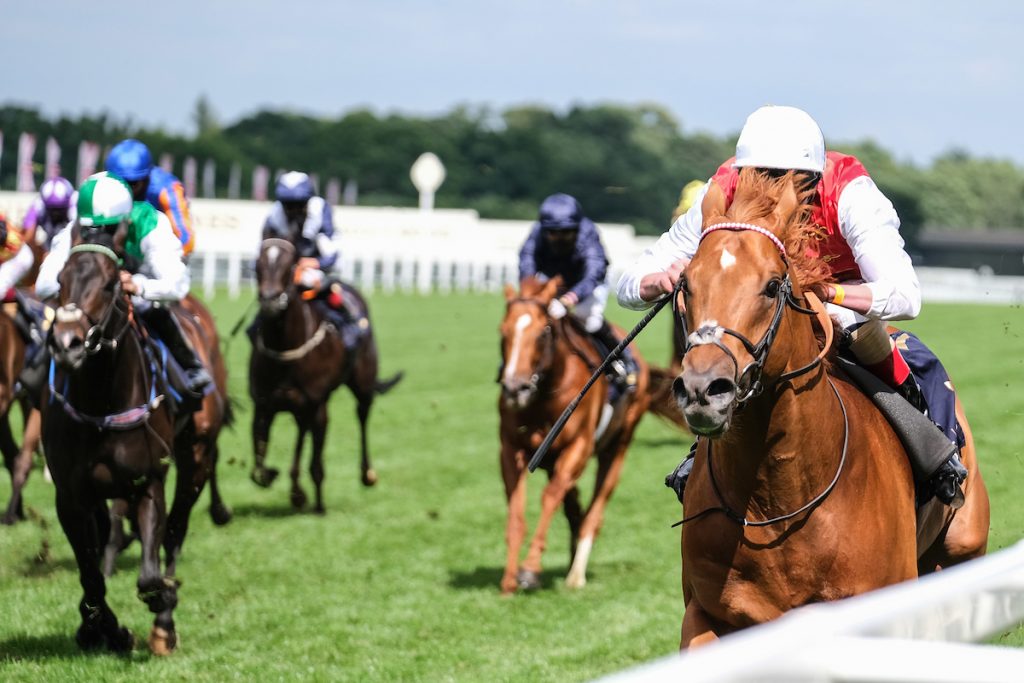 Friday’s G1 highlight, the Commonwealth Cup over six furlongs, saw a decisive victory for 5/1 chance Golden Horde. It was an eighth Royal Ascot victory for both trainer Clive Cox and jockey Adam Kirby.

Always travelling well, the son of Lethal Force held a clear advantage a furlong from home and was never threatened as he scored by a length and a half from American challenger Kimari (Wesley Ward/Frankie Dettori).

Clive Cox said: “Golden Horde was G1 placed twice last year and was great in [winning] the Richmond Stakes. We always believed this year he would be able to take a step up physically. He was a big horse last year, but he has really grown into that frame this year.

“I am very proud of him. We have got a great team at home and to win a G1 first time out with any horse is difficult, but given the way things are this year, it’s the same for a lot of people, but I am really proud. He is a horse to go forward with – I really hope and pray he has got a longer journey to go ahead of him.

“Golden Horde is just top-class. He has got a lovely temperament, is great to deal with and that ability to go on any type of ground is very special as well.

“He is out of a Pivotal mare [Entreat] by Lethal Force who we enjoyed such a wonderful day with when winning the Diamond Jubilee in 2013 – it is very special.

“We always trained him last year with the knowledge that with the right sort of behaviour he would be a better horse this year as well. It is just fantastic when it goes right and when dreams are realised.

“He would have had a penalty if he had run up at Newcastle in the Pavilion Stakes. We didn’t see the point of giving him a harder time than needs be. Martin Berry rides him at home, he is my head lad at home.

“We had an away day at Kempton with him. Jerry McGrath, who rides out for me in the summer, had a sit on him.

“When we took the rugs off him today, I was delighted with what I saw and I am pleased the performance has backed that up.

“The great thing about Lethal Force was he kept progressing with age. He was a better four-year-old than he was three-year-old. There is always that hope when you know they’ve got that ability and the size and stature to carry it out.

“Adam is rock solid and we have enjoyed lots of good days here, this really takes the biscuit. I am really pleased for Sheikh Sultan. It’s shame there are no owners here, but I am really grateful for his support.”

Asked about the July Cup at Newmarket on July 11 as a logical target for Golden Horde, Cox replied: “I would like to think so. That was very much on our minds. He has done the job really well today and I would like to think that would put a real edge on him having a race. I think mentally with these sprinters to have a race is important.

“I think with the knowledge that you haave a good horse, and when they do so succeed as you hope they do, it is like watching your own children, so that is why I’m proud of him.”

Adam Kirby said: “Golden Horde is a proper horse. When he had his first run at Newbury last season, we knew he was pretty decent, but he’s done nothing but improve. He has strengthened up very well over the winter. He is just like his dad, Lethal Force, and will improve as time goes on.

“He jumped away, travelled good – he has a very high cruising speed. He is just like his dad, just a different colour. We won’t be coming in back in trip or going any further. He is very quick, but he is very strong over six and I don’t think there’s any reason to change. He is quite a special horse.

“Clive [Cox] is like a second father to me. We have always had a good relationship, and long may it last. We have been together a long time; he knows me and I know him, and we are very honest with each other. That’ s why we get on so well together. It is straightforward.

“I have been a very lucky boy and ridden a lot of very good sprinters, but this lad [Golden Horde] is right up there. He is extremely talented.

“I kept it uncomplicated, although the race went a bit back to front. I thought the Wesley Ward horse would give me a lead to half-way but he didn’t jump. Golden Horde has a great natural cruising speed, and it was all very easy. Full credit to Clive, he has done a great job.

“Obviously that was a great day [birth of first child and Profitable’s win in the 2016 King’s Stand Stakes] that was a while ago now. I left the hospital that morning, left poor old Megan to get on with it, but she has done a fantastic job, she is a fantastic mum, and hopefully the kids will be at home watching.”