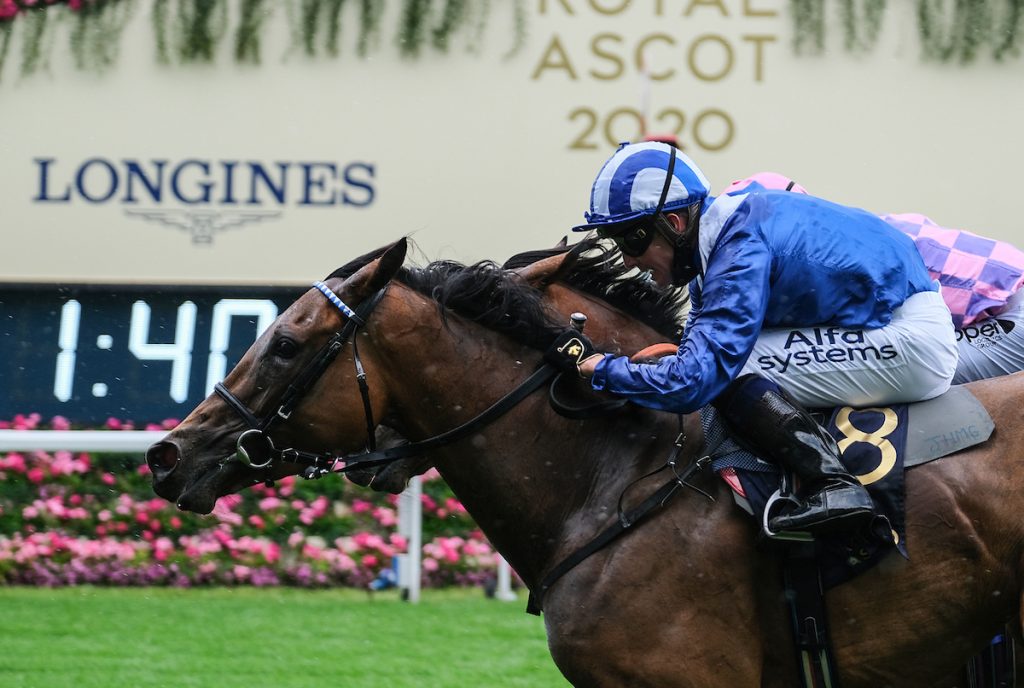 Jockey Jim Crowley’s dream start to Royal Ascot continued when he partnered 100/30 chance Nazeef to success in the G2 Duke of Cambridge Stakes, brining up a 118/1 treble on day one for the retained jockey to owner Hamdan Al Maktoum. It was a second success on day one for John Gosden, bringing up a 9.3/1 double for the Newmarket trainer.

Four-year-old Nazeef really battled inside the final furlong, getting up to deny 28/1 chance Agincourt by a head.

John Gosden said: “A wonderful treble [for Jim Crowley and Sheikh Hamdan]. It is testament to the owner – he has many horses in training with many trainers. He is a huge part of our industry and I think for Sheikh Hamdan to have a treble on the first day of Ascot – what a huge achievement. I am sure he would like to be here, but boy oh boy, what a great achievement. He puts so much into it and he deserves it.

“She is the sweetest filly; you go into the barn and she is the first to come and say hello to you. She is very affectionate and very genuine and very brave. She did nothing but improve last year; she went right through the handicap ranks and came into Listed this year. I have warned about the bounce factor; in her case she won the Listed race at Kempton and came back and won here. I think she deserves a little rest now.

“I say a little rest, a good four weeks and there’s a great race called the Falmouth! I don’t think we’ll be running her back in a hurry, that’s for sure. Having won a G2, obviously you would love to see her get a piece of a G1; placed or something. She is a homebred filly and it is very important to the stud.

“She is by Invincible Spirit; they take a little dig in the ground. In the end they went hard and she outstayed them, so I said, ‘we’re not going to a mile and a quarter quite yet, old boy’.

“The owner has never kept fillies in training. I did ask to keep Taghrooda in training as a four-year-old, because I thought she would have been invincible, but actually he doesn’t believe in that. He did keep Enbihaar in training last year and she won all those G2s, so Angus Gold got down on the other knee and asked if we could keep this filly in training, and here she is winning a Royal Ascot G2 at four. I think if you select the right ones to keep in training, it can be a wonderful time for them.”

Jim Crowley said: “It’s great to have three winners. I had some nice rides today and they all ran very well.

“I thought Motakhayyel would win when no-one else did. Mohaather was really unlucky in the Queen Anne and he is a lovely horse.

“It was great to make it third time lucky on Battaash, and Nazeef was coming into this race off the back of a nice win in the Snowdrop and she toughed it out really well. She has done nothing but improve with every run.

“I am very lucky to be riding some nice horses for some nice yards and that is probably the key really. It was redemption for Battaash today. He had a bit of unfinished business and he got it done.

“This is a special day.”