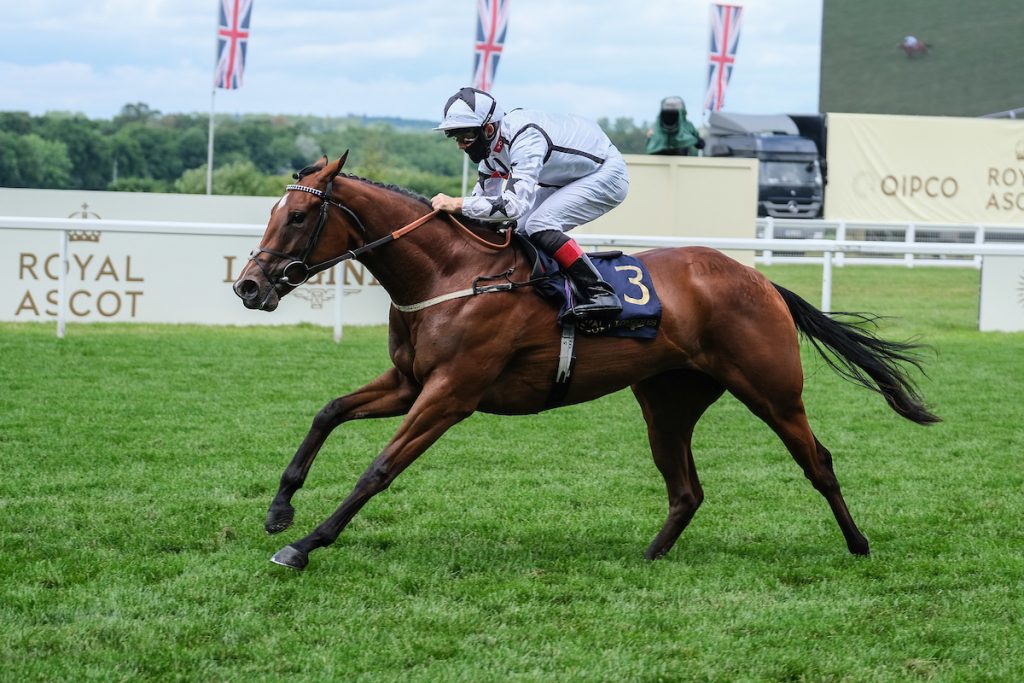 Dandalla made it two wins from as many starts when powering to an impressive victory in the G3 Albany Stakes over six furlongs, handing jockey Ben Curtis his first Royal Ascot win.

Owned by Nick Bradley Racing & Elaine Burke, the daughter of Dandy Man took up the running well over a furlong from home and never looked in any danger after that point. The 11/4 favourite Sethare stayed on to take second, six lengths adrift of Dandalla. It was a second Royal Ascot victory for trainer Karl Burke.

Karl Burke said: “We were worried about the rain the last 48 hours.

“I walked the track yesterday and it was very wet. We did not have as much rain today, but the ground is tacky. The thing that sort of tempered that was in her work, Dandalla has always been a strong galloper with a turn of foot. She has plenty of stamina on the dam’s side [Chellalla] and I think that came into play today and hopefully that will come into play again in the future with maybe the 1000 Guineas. If Dandy Man (her sire) is going to have a 1000 Guineas winner, it could be her.

“Dandalla has got a great turn of foot and then she keeps on galloping. A few times at the top of the Middleham gallop where we do most of our work, jockeys have been struggling to pull her up. My daughter Lucy earmarked her since before Christmas. She actually came in one day and said ‘I hate to say it, but this filly reminds me of Laurens.’ That will tell you how high she thought of her. She is probably more precious than Laurens – Laurens had not even run at this time during her two-year-old career. She is also speedier than Laurens. The question now is how far we stay, and we have got plenty of time to think about.

“She was entered in the Queen Mary. She obviously won’t run there and that was just in case the deluge came and we thought if it was heavy ground we would go for five furlongs rather than six furlongs. We only declared in the Queen Mary as there wasn’t a maximum field.

“Quiet Reflection was our first Royal Ascot winner and that was a massive result for us. This is a great result and it’s great to get a two-year-old winner here. I think we have done well with the two-year-olds over the last ten years. To go and buy one for €22,000, and our daughter Kelly will be absolutely delighted as she bought her at the sale.

“To buy them, train them, we own half of her – it’s great all round really.”

Regarding possible targets, Burke continued: “The Prix Morny comes into consideration for Dandalla. I have a few nice colts for that which I am considering as well, so we will just have to sit down and have a chat. Today was always the immediate plan. It was always going to be Newcastle and then here so we’ll sit down and think about things. There is no reason why we won’t be looking at G1 races for her.

“Time will tell how strong the race is. She has destroyed horses and now you would like to see one of those placed horses come out next time and frank the form and that is what we will be looking first and then take it from there. Either way, we have got a very strong filly.”

Ben Curtis said: “It is on every jockey’s to-do list. I have been coming down to Royal Ascot for a good while now and not really getting involved, so finally to get a winner is unbelievable.

“Karl’s daughter Lucy rides Dandalla every day and does all the hard work at home. I remember her coming down from the gallops one day, and she mentioned her in the same sentence as Laurens, and said she gave her that kind of feel. When she said that it gave me all the hope in the world. When Dandalla went to the racetrack the first time and did what she did [she won on her debut by two lengths at Newcastle on June 2], we knew she’d improve a ton, and everything went perfectly today and she’s demolished them. She has shown her class and it is brilliant. I ride for Karl all the time, so to be able to ride him a winner at Royal Ascot is unbelievable.

“It is funny, it was a surreal feeling. I came there are the two [furlong pole] travelling very well, and I just popped her between a couple just inside the two, and she came alive. I knew when we accelerated that nothing else would be able to pick up the way I did, because she picked up very well. In the last furlong I said, ‘We’re out on our own’, and it was a brilliant feeling and a great performance by the filly.

“I don’t care, crowd or no crowd! I am in racing to ride winners, and ride big winners, and try to improve myself year on year. We came into this year looking for quality – we have had the numbers before – and I have had two Group Three winners and now a Royal Ascot winner. I think I am just going to go in and pinch myself now in a second.

“When you are the one going for it, you hope it [a big break] is going to come. I was sitting on the shelf hoping it was going to come. I am elated; I cannot believe it. Luckily, I had a filly who was willing to do it before me.

“I had two things on my agenda. One was to ride a G1 winner, and I am still looking for that, and the other was to ride a Royal Ascot winner, and that is one off the list. Those two things were at the very top of my list. Every jockey would like to have a stab at being champion and being able to hold that title, so if I ever got in a position to go for the title, I would give it 120%.”