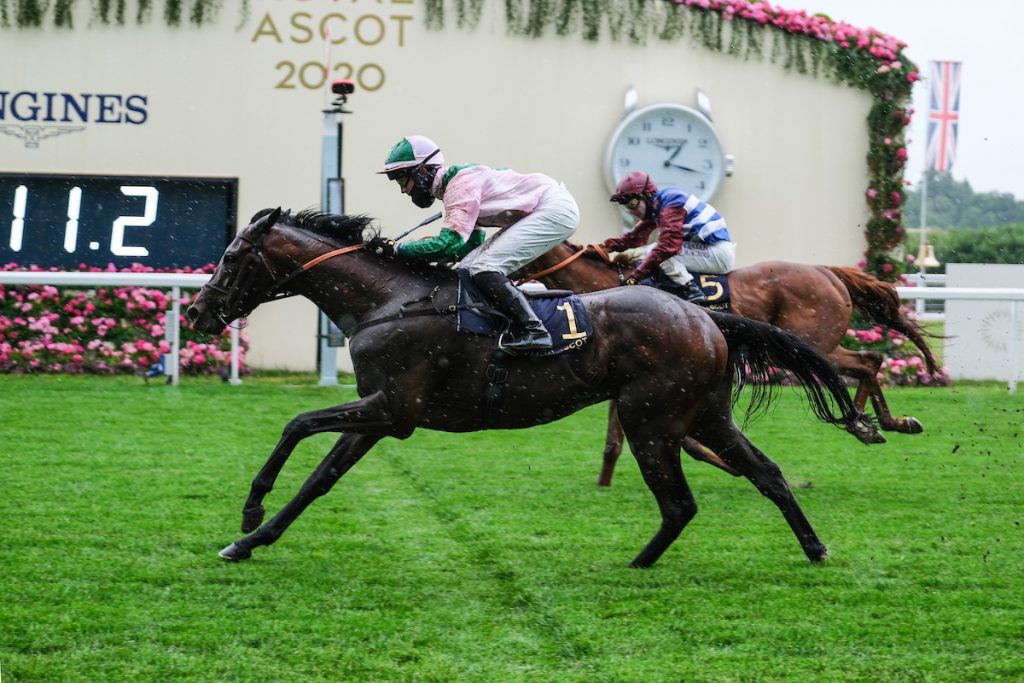 Day three of Royal Ascot 2020 began with a decisive success for top-weight Highland Chief (20/1) in the 10-furlong Golden Gates Handicap.

Grand Rock held a clear lead entering the straight but faded quickly in the final furlong and it was Highland Chief who stayed on to take the honours from Tritonic (Alan King/Oisin Murphy), with 7/2 favourite Global Storm (Charlie Appleby/William Buick) back in third.

Oliver Cole said: “It is fantastic, isn’t it? It is history, it is brilliant. Highland Chief is a very good horse; he won at Newbury on soft ground and was only beaten a few lengths by Pinatubo. He got bashed in that race and then made another run, so he has got ability. We would always have liked the ground today – luckily the heavens have opened. We could not be happier.

“Rossa [Ryan] rode his first Group winner for us – Duke Of Hazzard – who the other day probably got a bit tired, so I think we’ll see a better horse next time. It is all positive stuff.”

Referring to the fact that he now shares the licence with his father Paul, Oliver said: “As the expression goes, if it’s not broken, why try to fix it? We have got some good horses and we are very lucky to have them.

“This would have given Highland Chief a lot of confidence today. I think Eve [Johnson Houghton]’s [HMS President] came to head us and then he went again. He is a very good horse, but he only just does what he has to, so he is potentially unexposed. As the same time, he has come all the way up the rail and done a lot more than anything else. Dare I say, he is still a bit babyish – probably not quite the full racehorse yet.

“Obviously, the further he goes the better he’s getting. He is an exciting horse and probably very good. His mother was good.

“Sadly, my father is at his best friend’s funeral today [Ben Leigh], which is why he didn’t come. I did say to him today I thought we’d get an Ascot winner.”

Rossa Ryan said: “It has not really sunk in yet. I am a bit shocked that it has happened. I cannot thank everyone enough who has supported me to get here today. To ride a winner the Coles and for Mrs Fitri Hay is incredible.

“I was a long way back on Highland Chief, but the plan going out was to just get this lad to relax, travel and ride him to come home. Because it was his first run of the year, he was going to be a bit fresh and unknown at this trip.

“Highland Chief travelled lovely and he was picking up turning in. When I looked up, we were getting to the two-furlong pole and I thought the bird might have flown and I was going to miss the boat.

“I was a bit worried coming into today with all the rain that we had. Until I got up on him on the way to the start, he felt like he was going to go on it.

“It is lovely, loose ground. It is soft, but it’s loose so horses are getting through it – it really paid dividends to me. It might have been a different story if the ground was a bit dead and tacky, but it was lovely and loose and Highland Chief was able to quicken.

“I’m still 19 and 20 next month. This is my third season over in England, going into my fourth season you could say. It has been tremendous – I am mainly based with Richard Hannon and he has brought me through the ranks really well.

“I am just slowly, but surely building my contacts all the time. My agent Steve Croft is second to none. He is like a brother to me. I have got a lovely team of people behind me and it just has to fall into place – that’s all.

“I spent a lot of summers growing up at Willie Mullins’ and Enda Bolger’s yards. I learnt more at Enda Bolger’s than anywhere else. In my last year of pony racing we decided to take a crack at the Flat if I could keep my weight right and we went from there.”