It is Crowley again as Khaloosy takes Britannia 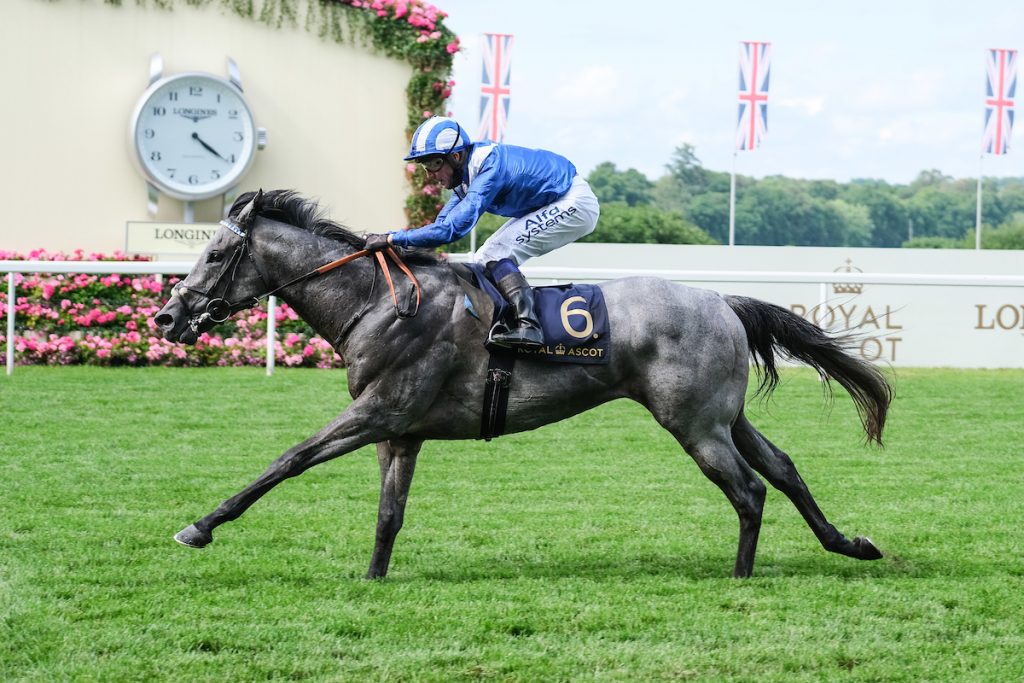 Jockey Jim Crowley chalked up win number six of Royal Ascot 2020 as Khaloosy recorded an impressive four and a half length victory in the mile Britannia Heritage Handicap. It was also a near 35/1 double on day three for the Ascot-born jockey following the success of Molatham in the G3 Jersey Stakes.

It is also proving to be a very memorable week for trainer Roger Varian, who heads the trainer standings with four wins. Varian, previously successful today with Mountain Angel and Molatham, was enjoying a near 321/1 treble on day three.

Crowley said: “I think Roger was tight getting him here, so he has done a great job.

“We were a little bit unsure about the ground, although when he won his race at Wolverhampton, he clocked a really good time and we have always held him in high regard.

“Six winners is the stuff of dreams, and it is great they are all for my boss (owner Hamdan Al Maktoum, Crowley is his retained jockey). It is a shame he can’t be here, but hopefully he is watching on the telly.

“You can’t do it without the horses, and I have come here many times. It is the hardest place to ride winners and I am very grateful to be riding horses capable of winning.

“No, it isn’t impossible [passing Ryan Moore’s modern record of nine winners at Royal Ascot]. Obviously, Elarqam’s form is working out really well, and he has run well on good to soft, although he wouldn’t want it too testing [in tomorrow’s G2 Hardwicke Stakes].

“Khaadem [runs in Saturday’s G1 Diamond Jubilee Stakes] is a very good horse in his own right, and hopefully he can step up to being a Group 1 horse.”

Roger Varian said: “I will pinch myself and wake up soon!

“We have always liked this horse, but to be honest, he is not flashy at home. I have to credit John Lowe, who rides him every morning and has been happy with his work. He had a little setback a month ago, which probably prevented us getting a run into him, but maybe it was a blessing in disguise, because he came here in good form. We were a little bit worried about ground conditions, but he got through that OK and won well.

“I think if you watch his Wolverhampton win and, although it was just a Wolverhampton novice and I am not sure what we beat that day, he won it in pretty good style, and he went into the winter as a colt we were looking forward to training this year. It has been such a funny beginning, with us having to wait until June to race. For sure, some of the horses have been working for a while and one or two are getting a bit bored at home. It has not been the easiest to judge where any of them are, but we have been pleased with this colt.

“We weren’t sure what to expect today, but we are delighted with what we saw. He won in the style of a horse with a big future. He has got a great pedigree, going back to Nathaniel and Great Heavens and that good Magnificent Style female line, so he has got the blood to be a good horse. He has done nothing today to say that he won’t be. You would think that would be it for handicaps – we could dream about only going up two or three pounds, but I don’t think that will happen. He looks like a 100+ horse and will have to go into Pattern company now.

“Ascot is a hard place to have any winners. As a big stable with a few chances, you dread going the week without a winner, but to get three in a day and four for the week, as I said, I’ll have to pinch myself and I will wake up soon.

“We have got some nice horses to run. We might have used all our luck up now and we will have to see what happens in the next few days, but obviously the string are healthy and in good form, and that always helps, as you know.”