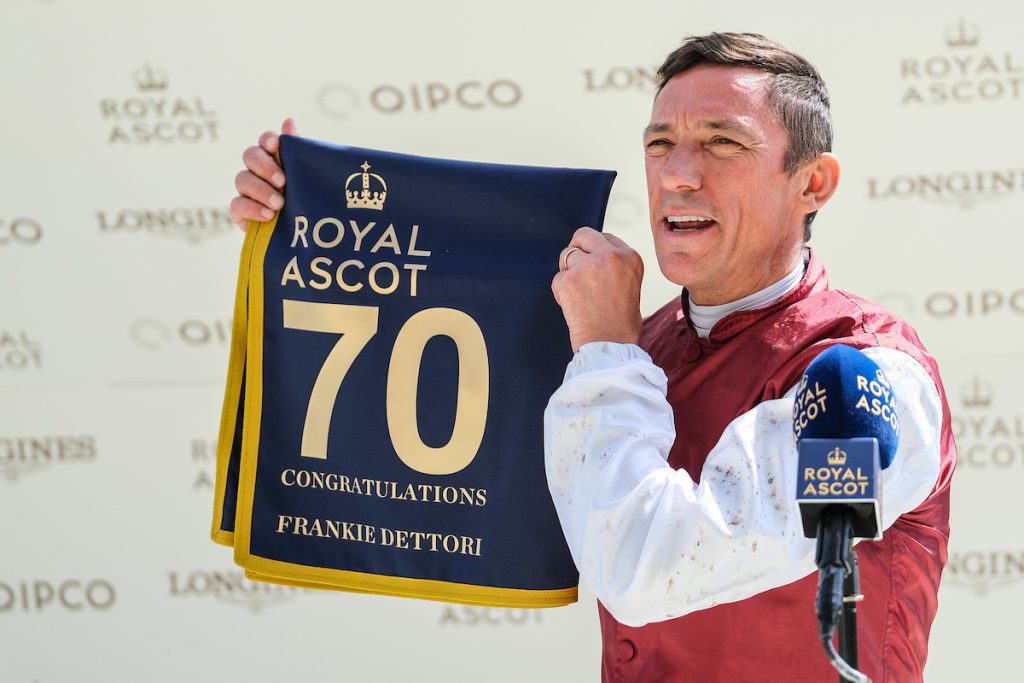 Frankie Dettori was in the winner’s enclosure for the 70th time at Royal Ascot after four-year-old filly Fanny Logan landed the G2 Hardwicke Stakes over a mile and a half.

Dettori delivered the daughter of Sea The Stars with a perfectly timed challenge entering the final furlong and the 17/2 chance went on to score by a comfortable two and a half lengths from Alounak.

Frankie Dettori said: “I love Fanny Logan. On paper, I thought maybe we were just racing for a place, but John gave me a lot of confidence and said she had come out of Haydock really well. She had improved mentally and physically.

“I was further back than I wanted to be, but they started racing pretty early and by the time I got to the furlong marker, they were all dead and she showed a good turn of foot – it was good.

“Look, she has improved from three to four, she is bigger and stronger, she was very fit, and she liked the ground. It was a proper performance and she has definitely improved from last year.

“I actually forgot I was one short of 70 winners, so that’s another milestone – it is good.

Trainer John Gosden, saddling his fifth winner of the week, said: “It wasn’t a fluke. She went up to Haydock, and I asked Rab Havlin to drop her out as she can be keen. She ran a lovely race to be second and had a very good blow, so we know the benefit of having that race in. She has been very bright and well in herself since.

“Wearing a hood settled Fanny Logan for her first run, but I find it can dull them a little bit and you aren’t going to go winning a Hardwick if you’re dulled. To that extent it worked well for her. She had to have it last year and learned to settle – you might remember PJ McDonald winning on her at York, and she took him on for two, three furlongs – but she has grown up and learnt a lot, and she certainly raced properly today.

“Frankie had the plan of making the running today, but I told him I didn’t think that was a good idea, and consequently that position was occupied by Communique, who went a good clip. He has ridden her coolly and sat out the back and swept down the outside, and she was clearly the best on the day.

“Frankie didn’t use that turn of foot in time in California in the Breeders’ Cup [finished fourth], so he’s learnt! Fanny Logan had won three or four on the trot in the autumn and was a filly in great form. We should have stayed closer to the pace and moved a bit earlier. She ran a blinder – that is a fast mile and a quarter at Santa Anita. She ran very well – what I loved about her was her last furlong that day. This year it is Keeneland and we’d probably be very keen to take her, but it’s a sand track, which is great when it is dry but when it rains, it gets very loose.

“Frankie’s belying his years and it is a pleasure to be around him. His knowledge and his feel when riding work in the morning – he is one of the few who is extremely accurate when talking about horses in the mornings – what they need and what they don’t need – and he is a great race-reader and a fabulous jockey. We are lucky to have him about.

Asked about Gold Cup hero Stradivarius, Gosden added: “Stradivarius is very well in himself today, bouncy and full of it. He ate up and couldn’t wait to go out for a lead-out and a pick of grass.

“The Arc was talked about for Stradivarius last year. We didn’t do it – we came here and got chinned over a slightly shortened two miles on the hurdles track. It has come back into play again. I did enter him earlier this week, so it wasn’t like I was ducking the issue. I think it is the concept of Ardross, who was a great, great Cup horse who then went and ran a fabulous second in the Arc, I believe, with Lester, and I think Bjorn [Nielsen] is thinking in those terms, and he is fully entitled to do so. We will simply see how we are doing come the autumn and what the plan is. But I always say the horse will let you know. Give them 10 days and they will let you know what they want to do.”