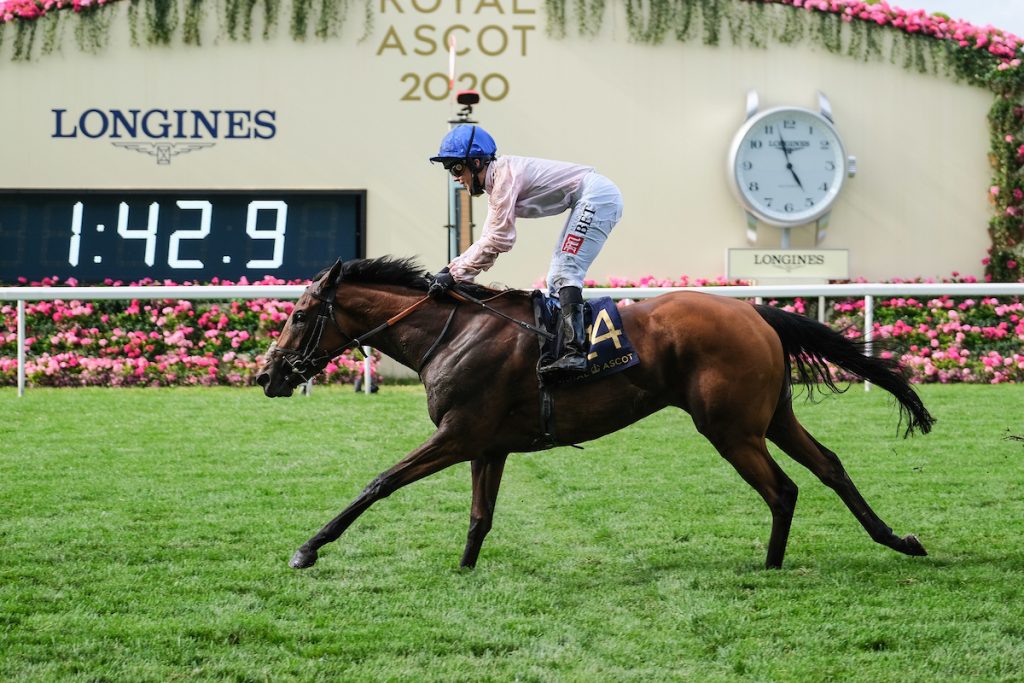 Trainer Charlie Fellowes and jockey Hayley Turner won the mile Sandringham Handicap for the second year in succession as 33/1 chance Onassis came home a length and a quarter in front. A year ago, the trainer and jockey had combined to take the mile contest with Thanks Be, who was also returned at 33/1.

Onassis boasts a superb pedigree, being by Dubawi and out of 1,000 Guineas runner-up Jacqueline Quest.

Turner, who is only one of two female jockeys to have ridden a winner at Royal Ascot along with Gay Kelleway, said: “Onassis felt really good. She had the perfect profile for the race – the same as Thanks Be last year – and Charlie [Fellowes] told me she would win it about three months ago! She took the conditions really well and took her time. She is a very nice filly and did it easily.

“I rode a very similar race to the one I rode on Thanks Be last year, and that was the plan from a similar draw. It is a very stiff, testing mile today, so I was able to tuck Onassis in and let her find her feet a bit and get settled in, and she just cruised through them. She did it really well.

“I thought, it is not going to be the same [without crowds], but actually I am buzzing just as much as last time. I was just hoping everyone at home was cheering. I could hear my Nana shouting!

“It is still an Ascot winner – still the same race, same grade of horses. It is just as hard to ride winners whether anyone is here or not. When jockeys come racing, the weighing room is like a sanctuary for us and you don’t really see them socialising; it’s more the trainers it makes a difference to. Nothing really changes for us, apart from not having everyone cheering you when you come in.

“It has been a bit frustrating [since I returned to race riding], but I have been getting plenty of rides and knocking on the door. It is just a case of keeping patient and carrying on as you are. If you don’t let it fry you, you just keep riding as you can.

Charlie Fellowes said: “Onassis has an outstanding pedigree and I begged the owners to have a crack at this. This was the perfect race for her. She is a very good traveller and I thought the stiff mile would suit her. I have been wrong about everything else today, but I got this one right which is a relief.

“Onassis loves being ridden patiently, which is another reason I thought Ascot would suit her. I was a little concerned about the ground, but I should not have been because Dubawis are Dubawis and they go on anything – he is an outstanding stallion.

“To win this race two years in a row, same weight, similarly awful draw. We thought we had an appalling draw and lucky we got the same result – it is amazing.

“Ascot tames lions. It was a tough day until now. First Prophet was really disappointing and King Ottokar had a lot of ground to make up – luckily Hayley saved the day.”

The 9/4 favourite African Dream sustained a pelvic injury in the concluding Sandringham Handicap. She has been taken to the stables and is in a stable condition.