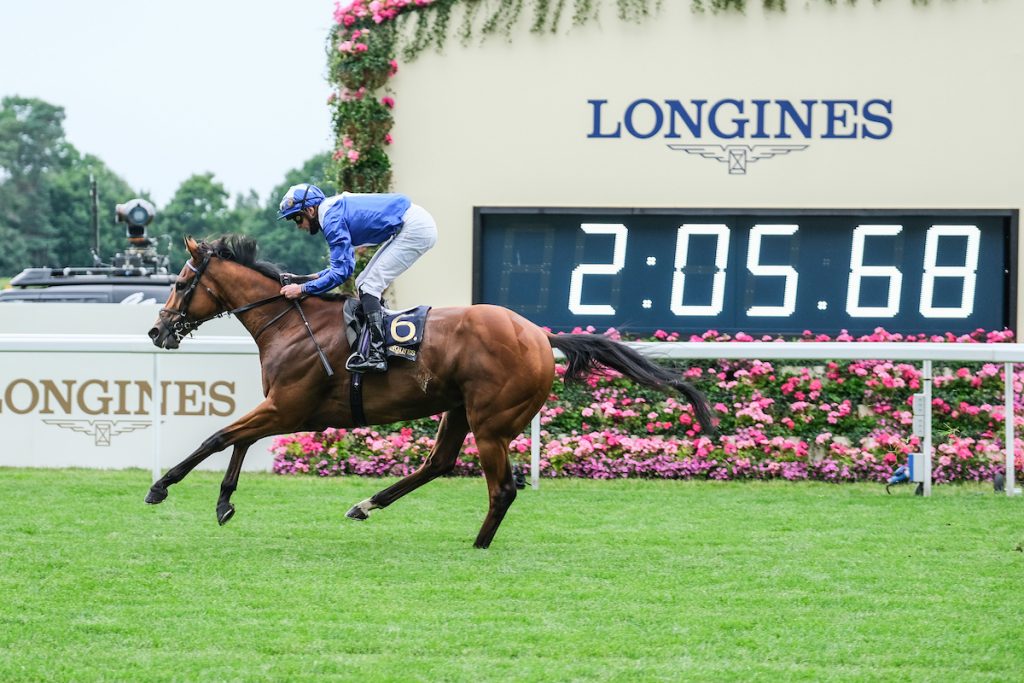 Lord North landed one of the season’s most competitive handicaps in 2019, the Cambridgeshire at Newmarket in October. Having followed up that victory with Listed and G3 wins, the four-year-old came of age today when taking the G1 Prince of Wales’s Stakes over 10 furlongs.

The seven-strong field entered the final furlong virtually in a line across the course, but Lord North demonstrated an outstanding turn of foot to come home comfortably by three and three quarters lengths from Addeybb (7/2).

Gosden said: “Lord North was gelded (after 2019 spring campaign), he needed to be. He was tormenting himself. Testosterone is the most dangerous drug in the world, and he is a lovely horse to be around now.

“Halling had a hock injury as a three-year-old and it messed his career up. This boy just became aggressive at the gate and was becoming a danger to himself, let alone others.

“Lord North has a lovely character now and when they let Bangkok have his head as I thought that would do one day, boy we had an honest gallop.

“Japan missed the break which messed him up for him and Addeybb was right up there. We had a good even pace to run at and he has come from last. He was ridden very cool. Rab Havlin told James Doyle that was the way to ride him. Rab has ridden him in all his work and rode him at Haydock.

“James did the job well on him. James is a retained jockey to Godolphin/Darley.

“Frankie had always liked Mehdaayih. He was going for her and just stayed with her. He had a beautiful run through and thought she was going to win, but she got tired in the last furlong. She is not a filly you can give a race to and come back 10 days later. She will have benefitted from that race, but not 10 days after her last run. She has run a lovely race and will be aimed at the Nassau.

“Lord North has got better and better. He is very powerful and, for a gelding, he has a great body to him. I was looking at the race and talking to Peter [Shoemark, John Gosden’s Racing Office Manager] and I thought this race was winnable for Lord North, so at 9:55am we put him – it was very late.

“I was toying between this race and the Listed Wolferton under a penalty as you want to have a winner at Royal Ascot. I said no, let’s go for this.

“I would say give him a week, 10 days and see how we are. He has had two very quick races. He blew up at Haydock. Rab said at the furlong pole, he went for his girths, so he did well to hang on there. He has had two hard races, so we’ll freshen him up and then make decisions.”

Looking ahead to tomorrow where he saddles the hat-trick seeking Stradivarius in the G1 Gold Cup, Gosden continued: “Stradivarius – I am keeping wearing my hat! I was noticed having my flapjack and coffee on the grandstand by your cameras and I am keeping this on in the hope that it will keep the rain away.

“He does not want soft ground, if we get a lot of rain it dents that wonderful turn of foot which is his great weapon. I hope it remains relatively dry, if it doesn’t, it opens it up and a horse like Technician comes into play.”

James Doyle said of Lord North: “I think when John [Gosden] takes a horse into a race like this, you do have to prick your ears. Obviously, Lord North looked quite unexposed coming into it and he has gone through his grades. He won the Brigadier Gerard nicely up at Haydock but looked to get a bit tired, and John said he’d definitely improved a lot for that run. Going into this, the vibes were all pretty confident from Mr Gosden’s camp.

“I was asked if it all played into my hands, and I guess it did in the sense of how the race panned out. I didn’t see them going as quick as we ended up going. I think Japan missed the break, Bangkok ended up going forward and I felt it was a pretty even-run race. Lord North settled beautifully out the back, took me into the race nicely and showed a good turn of pace when I asked him, so it certainly wasn’t a fluke, and he can continue this and be quite a strong force in these type of races.

“He feels like a solid mile and a quarter horse. He is quite versatile on the ground, I guess; it is beautiful out there and perfect for everyone. It suited him well. I wouldn’t want to bump into Enable, but she’ll be going up in trip before too long.

“Although I haven’t ridden Lord North in the past, I was quite well-armed going into it. Frankie gave me some great advice with him, and Robert Havlin, who has ridden him quite a bit, was very helpful this morning, so I felt like I had ridden him, although I hadn’t – I had all the right people telling me the right things. When you end up where we were, back on the rail, you have to ride the race as you see it and once he got the gap he did surprise me with how well he quickened. But obviously he has run at shorter [trips] and showed good pace. It was a real joy to ride.

“I don’t know what the sectionals were, but from my point of view it felt like they were pretty even, but he travelled into it great and showed a good turn of foot. I’d like to ride him again, put it that way!

“Yes, it is nice to get one on the second day. It all chills out a bit after you get a winner on the board, you can just settle in and ride your races, without the worry that you just get a winner.”

William Haggas, trainer of the second Addeybb, said: “I am very proud of Addeybb today – he has run a great race. I am not saying if the race had been run on softer ground [he would have won], but he is better on softer ground. He always tries his heart out and has run a solid race again.

“Addeybb just tries. If I keep running him on good ground, he will not keep going and doing that [running well]. He just gives his all and he has become a high-class very consistent horse and that is another very good run.

“We just need the heavens to open. That slows the quicker ones down and he is more effective on soft ground – he has run a great race.”

Trainer Charlie Appleby said of the third Barney Roy: “Barney Roy has run another solid race and, if you take the winner out, there is not much between the rest of them. We were concerned whether there was going to be much pace in the race as he tends to latch on the bridle a bit.

“He saw the trip out well – I don’t think that we will be going any further than a mile and a quarter – and it would be nice if we stick to our long-term programme with him, which was to take him out to Australia. I think he will be a fun horse to take out there. We will see where we are come the autumn and if we can travel with him.”