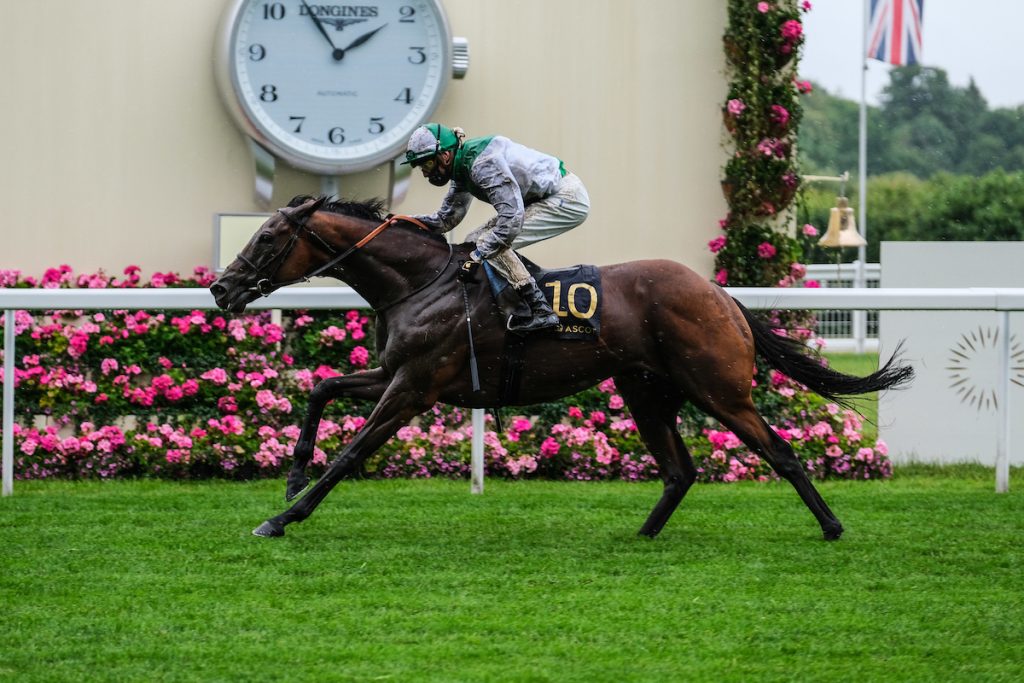 Jockey James Doyle bagged his third winner of the week as he superbly delivered Mountain Angel (8/1) up the inside to comfortably take the Listed Wolferton Stakes over 10 furlongs.

Doyle, who has now ridden a total of 16 Royal Ascot winners, said: “He did it, it worked out perfectly for him. Obviously, he ran a good race in it last year, finishing fifth, when he got into a bit of scrimmaging in Swinley Bottom and that put paid to his chances.

“Today the rain has come for him nicely, as he relishes cut in the ground, and it couldn’t have been much smoother, he travelled around really good.

“I could have done with them going just a bit quicker to help him relax, but he carted me into it. I pulled my googles down when we turned in, and couldn’t believe how much room we had up the inside.

“It was just a case of not getting there too early and he really knuckled down well when I asked him.

Regarding the week as he has had so far, Doyle added: “You have to enjoy it. It is obviously a bit, well a lot, different from what we are used to here. I was watching the replays back last night and it all seemed a bit quiet. It is nice to ride a winner to try and liven things up a little bit! I am not Frankie, unfortunately, but it is nice to be standing here!”

Roger Varian, enjoying his second winner of the week, said: “Mountain Angel had everything in his favour. He is a good horse fresh – he has shown that over the years. He gets the trip well, loves a bit of dig in the ground and trained well at home.

“Mountain Angel ran well in the race last year [finished fifth] after getting shuffled back early from stall one. It was probably a slightly stronger renewal last year, but he has run well today. I am delighted for the owner [Ziad A Galadari] who has been very supportive of me and very patient with this horse. A big thanks to the team at home who have been doing a great job over the last few months.

“Mountain Angel is a horse who probably doesn’t need over-racing. We took him to Bahrain [Bahrain International Trophy, finished 13th] on a fact-finding mission last autumn to see if he would be an international horse, but he just didn’t like that firm ground.

“I think we will bide our time with him, as he ran well in a couple of Group races last autumn and I think we will follow a similar programme. I think he will deliver when things are in his favour.

“He was placed in a Prix Dollar last year and on the back of that, I think he has a Group race in him.

The unbeaten Pierre Lapin heads the market for tomorrow’s G1 Commonwealth Cup [3.35pm] and Varian is relishing the return of the three-year-old in the six-furlong event.

Discussing his chances, Varian said: “Pierre Lapin is in great form. He looks a picture, is moving well in his work, has had a smooth preparation into the race and we are very hopeful.

“I think the ground is always a concern when it gets this soft. Pierre Lapin has not raced on it before. He will certainly have to answer the question on soft ground, but we won’t know the answer until tomorrow afternoon. I would be hopeful he would handle it, but I won’t know for sure.”

Click here for an audio interview with Roger Varian: