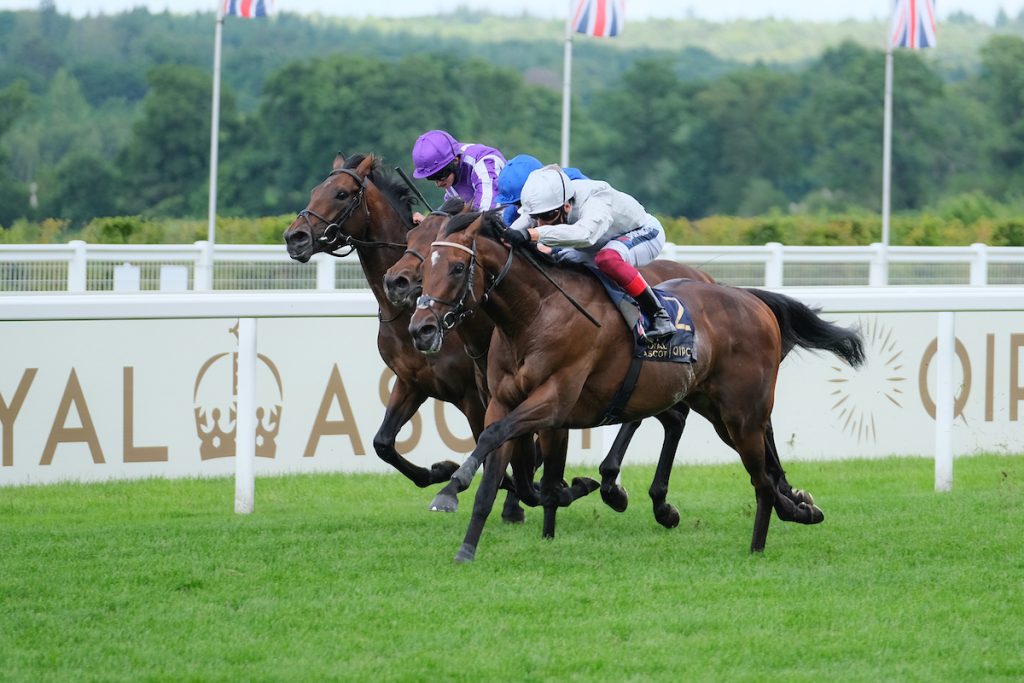 There was no stopping Frankie Dettori on day five of Royal Ascot as the jockey brought up a 150.25/1 treble when partnering Palace Pier to victory in the G1 St James’s Palace Stakes.

It looked a three way battle between Palace Pier, Pinatubo and Wichita inside the final furlong and it was Palace Pier who found most, lengthening well to score by a length from Pinatubo, with Wichita another head away in third.

Dettori is now on six winners for the week and has enjoyed 73 Royal Ascot winners in total, equalling the record of the late Pat Eddery. He said: “What a day! We always thought a lot of Palace Pier, but he got a bit sleepy on us in the mornings and we were scratching our heads. John [Gosden] did a great job, and he thought, let’s start him off in a handicap at Newcastle to see whether he would wake up, and he did. We threw him in at the deep end today, but in the back of our minds we knew that there was a good horse in that big body, and we just were not sure how much of a good horse he was. Today was no fluke.

“I went wide, he went round the field, he galloped out good, and the Guineas form stood up. I am pleased he showed me today what I thought potentially he was going to be.”

On being asked what it meant to equal Pat Eddery’s total of 73 Royal Ascot winners, Dettori replied: “I sat next to Pat for 15 years; he was one of my heroes, I used to nickname him ‘God’ and to equal him gives me great satisfaction, God bless him.

“Palace Pier is so laidback that he could probably reach a mile and a quarter, but a mile at the moment is pretty much what he wants. When you have got a good horse, he is easy to place and I am sure John will have a good plan for him. He is a Group One-winning son of Kingman and we can think of the future with excitement.

“I woke up this morning thinking I had some great rides. I really fancied Wesley Ward’s filly [Campanelle], I fancied Jessica’s [Alpine Star]. This fellow [Palace Pier] was in the deep end but I thought that he could have a chance. Then I am riding the Irish sprinter [Sceptical, in the G1 Diamond Jubilee Stakes] – he is in great form. He is taking on Group One animals but he’s coming into this race extremely fit and on an upward curve. I have got great faith in the horse. It is been an unbelievable day and an unbelievable Royal Ascot. To come out of here with six ones is not easy.”

John Gosden said: “The race panned out well. Frankie said he wanted to ride Palace Pier a little cold. He settled him off the pace. He knew there would be a searching pace and I think Ryan Moore was happy with how the race turned out on Wichita. It got a little rough and Frankie avoided all of that. He swept round the outside and I think that he demonstrated superior stamina, which he also showed at Newcastle, when he was really strong in the last furlong.

“It is no fluke. He is a really talented horse and he will go for the Prix Jacques Le Marois at Deauville, which his father Kingman won.

“Pinatubo is a horse that is so fast that the quick mile in the Sussex will suit. I know Charlie has wanted to run him there and I’m sure that is where he is going and I hope he does it like we did with Too Darn Hot.

“I think it would have been madness to put a horse into a 2000 Guineas with no experience of that kind of level of competition.

“When you get a little injury, not a big one, but enough to finish his season. If you go to a Dewhurst or Jean-Luc Lagardere that’s fine as you’ve had the experience, but you can’t go into a Guineas off a novice event.

“Palace Pier is a lovely horse and we knew he would really like the track. Consequently, we were keen to bring him here after Newcastle. Luckily that race fitted in and it set him up for this.

“This is a very stiff mile at Ascot and the ground is dead, just riding slow so it suited him and he showed his stamina.

“I think Palace Pier’s two wins were very impressive last year, but he sustained a little tibia injury so he couldn’t run in the Greenham.

“It is fantastic that we are here, perhaps a bit of a miracle, as we only started racing on June 1. Ascot has put on a fantastic biosecure environment for us, out in the open air all masked up, it has been very well run. It is great to get the meeting off.

“For all of my staff who worked incredibly hard through the whole of lockdown. We were in every day training the horses. We are lucky we are out on the Heath because you can’t leave the horses in the boxes. If they get too fresh, they are going to hurt themselves, so they have to exercise.

“We are out on the Heath with everyone else, every day, socially distanced, and the horses are fit and well. It is testament to the staff more than anything to do with the trainer.”

Trainer Charlie Appleby said of runner-up Pinatubo: “I am disappointed to get beaten again, but we saw the Pinatubo we saw last year, for sure. From the three to the two there I thought, it’s just a matter of pressing the button again. Will [Buick] just said that on that ground, in the last 100 yards the tank was emptying out, but he is so courageous, he has held on for second still.

“Like always, we will get him back, speak to the connections. The Sussex Stakes is an easy mile, we have seen what he can do round Goodwood, he is able to handle the track, so that is always an option.

“He is still a class animal – we are not going to write him off just yet. When he walks in you can see that he has given it everything. When he turned into today, I thought we were back in the days of old. It is sticky and testing out there – it’s not bad ground, just a bit sticky.”