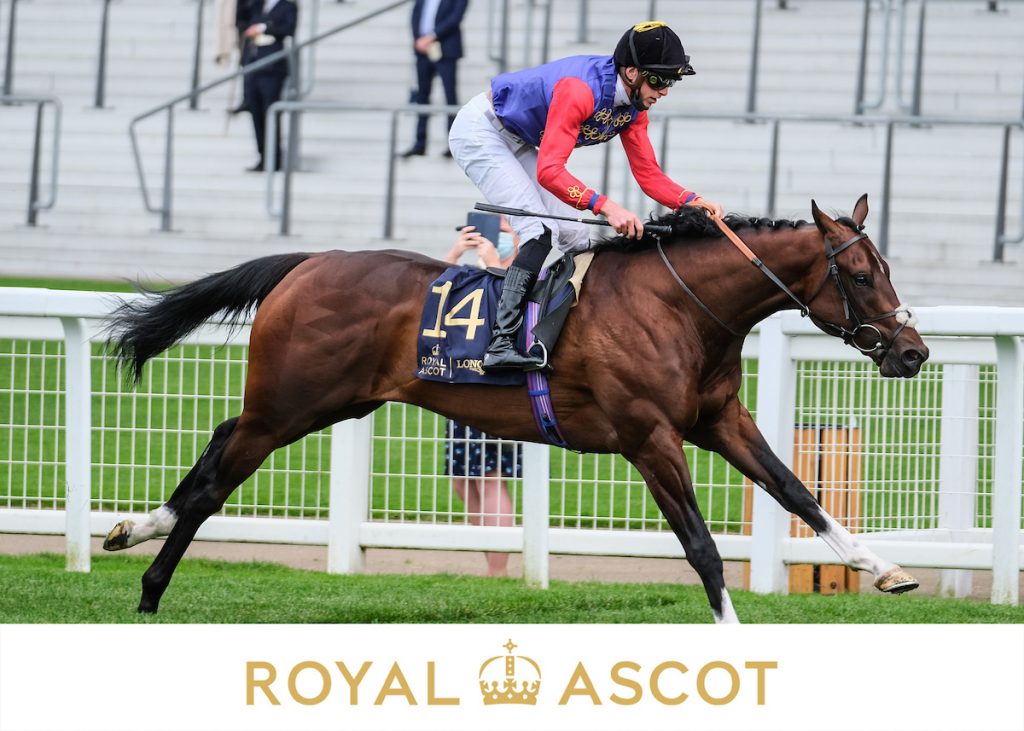 The Queen may be missing for the first time in her reign, but Tactical (7/2 Fav) handed Her Majesty a 24th Royal Ascot success when taking the Listed Windsor Castle Stakes. It was a sixth Royal Ascot success for trainer Andrew Balding and a 15th jockey James Doyle, who was recording a 26/1 double following the earlier success of Lord North in the Prince of Wales’s Stakes.

Tactical, a homebred son of Toronado, had shaped promisingly when third on debut at Newmarket on June 4 and showed the benefit of that experience when staying on well for a length and a quarter victory over Yazaman (20/1).

Andrew Balding said: “Tactical was showing a fair bit at home before we ran him first time out. He ran a nice race and learnt plenty, and James gave him a lovely ride today, but we were quite hopeful, especially when it looked like the draw was more of a help than a hindrance.

“He was showing plenty early. He would have been, for me, ready to run in April, which is very early for one of mine. He has got a great attitude and is very professional. It is obviously a huge thrill for all of us to have a Royal winner at the Royal meeting. I feel very lucky.

“Dad [Ian Balding] was lucky enough to have a Royal winner here, and my uncle William [Lord Huntingdon] had a couple, so it is nice to keep up with them.

“We thought Tactical had learnt a lot [on his debut at Newmarket on June 4] and would be a bit sharper, and that very much proved to be the case. But he still had to get the job done and did it nicely at the end. I think he will be better over six furlongs, and we stuck at five because we thought the Coventry Stakes would be a much stronger race, but he will certainly be going six furlongs and looks up to Group class, anyway.”

Balding was asked how communication with The Queen regarding her horses works. He replied: “With the routine stuff it is obviously John Warren [The Queen’s racing adviser] we deal with, but on a raceday we tend to give her a ring in the morning and tell her our thoughts, which I did this morning, so she was well-informed. She will be thrilled, I am sure!”

James Doyle said: “I was quite confident to be honest. Oisin rode Tactical first time and I rode in that race, so I could see by his reaction that he was quite frustrated afterwards.

“Things just didn’t quite go to plan as there was a speed and rail bias that day, but I loved the way he came home. The vibes were very positive and that was justified by him going off favourite – there was plenty of market support for him all day.

“It was a straightforward race. I was a bit concerned about the draw and could foresee a few traffic problems if he didn’t begin quickly. But testament to Tactical, he took it all in his stride, he jumped the gates very quick. I got a nice lead from Oisin and he actually stayed off the rail, which helped me. I kept things simple and was conscious about not getting to the front too soon on a horse who is inexperienced.

“A runner in the centre of the field kicked for home and that took me out of my comfort zone for a few strides, but a furlong down I knew I would get him and I knew his last furlong would be his best furlong. Oisin sees him as a six or seven-furlong horse going forward, so he has performed with a lot of credit today.”

Reflecting on what it means to ride a winner in the famous colours of Her Majesty, Doyle continued: “This is what dreams are made of. When you start off riding as an apprentice you want to ride winners here. I started off for a few years without getting close to a winner and then you finally get your first one. I have hit the board a couple of times for Her Majesty at this meeting so to get a winner for her is what dreams are made of. I was second on Magnetic Charm for her in the Sandringham Handicap last year, so get it right today is great. It means a lot.

“It is just a huge honour. It is not one of the flagship races here, but it is the connections involved – it’s great.

“I was here the day Estimate won, it was an amazing reaction, we don’t have that here today unfortunately, but I hope Her Majesty enjoyed watching it.”

John Warren, Racing Manager to The Queen, commented: “Everyone involved is thrilled. All of Her Majesty’s stud team and staff team at Sandringham and Polehampton through to the operations that provide the horses and obviously Andrew Balding and his team. It is a big team effort and it’s wonderful for Toronado to sire a big two-year-old winner like that.

“It is lovely for The Queen. She has a nice, young mare [Make Fast, dam of Tactical] and this is her first foal. Throughout the conversations, Her Majesty was saying how delighted she was to breed a two-year-old winner. It is lovely to breed and own a lovely Royal Ascot two-year-old.

“Andrew Balding had been saying from the spring that Tactical was naturally precocious and had found his work terribly easy. It looked as though he was a nice prospect, although at that point we didn’t immediately clock him as an Ascot two-year-old.

“When he ran at Newmarket and he got himself into a bit of trouble, but he had such a good introduction and came out of the race so well, it boded well for his prospects to come here.

“We debated running him in the Coventry Stakes over his preferred trip, but we felt Tactical had enough pace. He is very powerful and strong, so we thought we would take our chance over the five furlongs and luckily we learned that he will make the switch up to six-furlongs quite happily so we will look at races like the Richmond at Goodwood or the Prix Robert Papin.

“It is obviously a great shame that Her Majesty is not at Royal Ascot to enjoy the buzz of a winner. She has studied every bit of it today watching the races. The last two days she has been able to spend a little bit of time watching the big races. This was the icing on the cake to have a winner for Her Majesty – it is tremendous.”

First Receiver was a creditable second in the G3 Hampton Court Stakes for Her Majesty earlier on the card and Warren was pleased with the performance of the Sir Michael Stoute-trained three-year-old. He added: “First Receiver has run a lovely race and he has a very nice future ahead of him.”

Non-Runners: 7 Macho Pride (Going), 13 Steadman (Self Certificate, not eaten up)