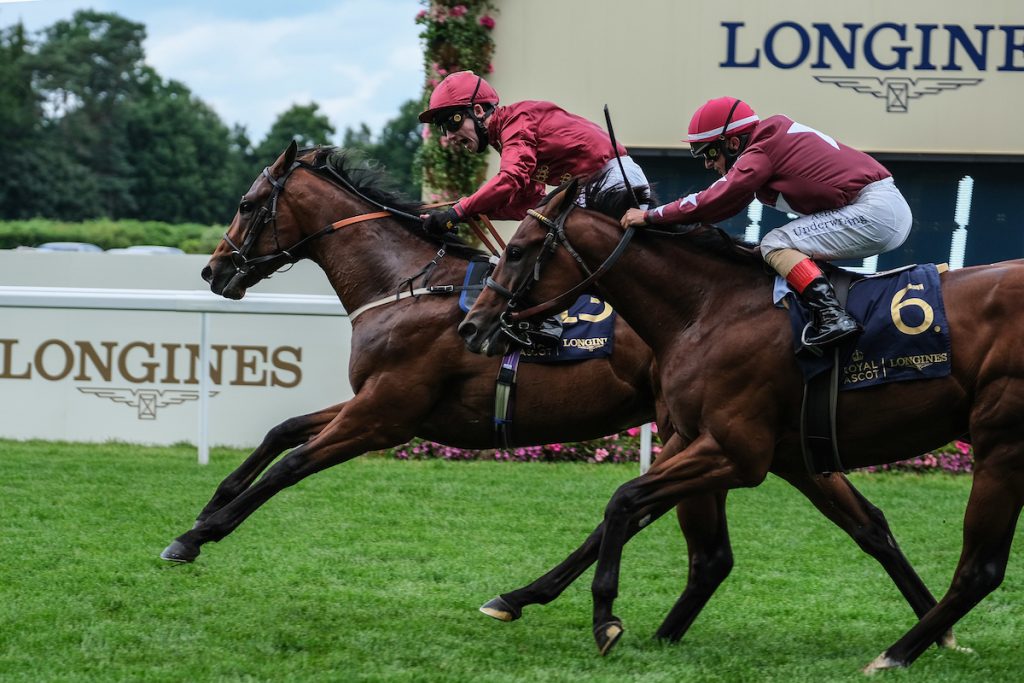 It looked as if American challenger Golden Pal (Wesley Ward/Andrea Atzeni, 12/1) had the G2 Norfolk Stakes in the bag but a strong run from 9/2 chance The Lir Jet (Michael Bell/Oisin Murphy) in the closing stages saw the latter get up to score by a neck.

It was an eighth Royal Ascot victory for Newmarket-based Bell and a fifth for Oisin Murphy – the jockey’s second win of the week following Sir Busker in Wednesday’s Silver Royal Hunt Cup.

The winner is now unbeaten in two starts, having won on debut at Yarmouth on June 3, when he was owned by the trainer’s son Nick. Following that win, the two-year-old Prince Of Lir colt was purchased by Qatar Racing.

Michael Bell said: “During the race, I was a bit worried when the leader went so far clear. Oisin [Murphy] obviously thought he had it in control, but The Lir Jet battled. He is very inexperienced – he had only run the once – and has never had to dig in before because when he won at Yarmouth, he won on the bridle. He has learnt how to race today and I think you will see an even better performance next time, hopefully.

“At Yarmouth he broke the track record, but he did not learn a lot because he went so easy, so today he really had to dig in and learn how to race. I think it’s so good when you see a horse with that sort of attitude, and it bodes very well for the future.

“I think he is all speed; he is by a sprinter out of a Green Desert mare. I think he will definitely get six, but I wouldn’t be thinking he will get further than that.

“The sire [Prince Of Lir] won the Norfolk [in 2016] on soft ground, so we were quite hopeful with the ground, I did not think that would worry him. He has obviously already won on fast ground, so he is one of those lucky horses that goes on anything.

“My son Nick found him from Robson Aguira, who bought him very cheaply and was going to breeze him up. When the breeze-ups were cancelled Robson and Nick came to an arrangement and the horse came to us. Then Sheikh Fahad was watching Yarmouth on telly and sent me a text asking if he was for sale, and the rest is history. A good bit of business for all involved, and very nice for us to have a good winner for a very important owner – it is high profile for us. Any trainer needs good horses and good winners, especially for big operations like Qatar.

“I am particularly pleased because this is very much Nick’s deal and he must take a huge amount of credit.

“My gut feeling is that if The Lir Jet runs in another G2, he’ll be carrying a penalty, so I’d be inclined to point him at something like the [G1] Prix Morny, but I think we should talk to Sheikh Fahad and David Redvers, and we will come up with a plan.

“The Nunthorpe would be another option, but the balls will go in the air. When you start winning Group races with two-year-olds there is stallion potential, so there are all sorts of things that need to be considered. But if Battaash was to go for the Nunthorpe, I would probably say he should be avoided.

“The Commonwealth Cup would be an obvious target this time next year – when all the crowds will be here.”